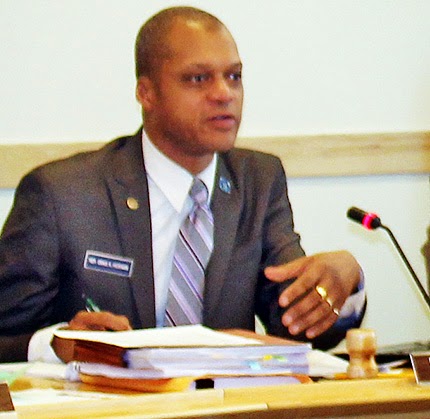 About halfway through the Bureau of Public Lands’ annual report, Rep. Craig Hickman leaned into his microphone and, as one onlooker put it later, “tipped over a beehive.”

"The ACF Committee room was unusually crowded March 10, perhaps because of the controversy last session over Gov. LePage’s unsuccessful proposal to expand harvesting on public lands to fund heating efficiency programs. But LePage has not given up on his plan, saying he’ll withhold $11.4 million in bonds for the Land for Maine’s Future program until timber harvesting on state-owned lands is increased to aid efficiency programs. The governor’s budget also would move public lands to the Maine Forest Service (MFS), which also is raising concerns.

"The March 9th meeting started quietly. For the first hour, Doug Denico, MFS director, simply went through the BPL report, page by page. He’d reached Page 24, when Hickman, D-Winthrop, who is House chair said, “Mr. Denico, I just have a question. I was looking forward to asking the acting director of Public Lands the question that I asked at the public hearing, but he is not here today. Is he still employed?” (Read more)

Posted by Craig Hickman at 6:47 AM No comments:


REMARKS OF REPRESENTATIVE CRAIG HICKMAN ON THE SENTIMENT TO HONOR THE HEROISM OF SHARON WISE OF WINTHROP – MARCH 17, 2015

Mr. Speaker, women and men of the House, I rise to honor the heroism of Ms. Sharon Wise of Winthrop, who, back in December, was ready to fight to keep a young girl from being abducted, but first, I would like to read from the Posting Guidance for Federal Agencies as presented by the U.S. General Services Administration Missing Child Notice Program. And I quote:
End quote.

The compassion on display in this guidance underscores an alarming statistic:

And so, yes, missing child notices present a powerful and emotional message. I’m sure we’ve all seen them. Children’s faces plastered on the walls of the post office or the grocery store.

According to the most recent published statistics here in Maine, since 1971, seven children reported missing have not been found. Their families have no closure. There is a grief that knows no outlet. Can you imagine the emotional turmoil of mother who goes every single day to the last place her son was seen hoping to find him right there calling out for her? Can you imagine the desperation of a father, who, every time he hears the wind blow open the gate to the back yard, runs to a window hoping to see his daughter walking up to the back door. Can you imagine?

Later today or tomorrow or the next, I say go hug your children or grandchildren, your young nieces and nephews and godchildren. Embrace them as often as you can. Let them know that they are special little angels and that you love them from the bottom of your heart. For in the blink of an eye, any one of them could go missing. We wouldn’t wish that heart-shattering tragedy on any parent or grandparent or uncle or aunt. And so when you hold your children close and tell them how special they are, think of those whose vigilance, responsiveness and bravery have kept families whole.

And so, Mr. Speaker, women and men of the House, I rise also to say this:

Let us honor Ms. Sharon Wise of Winthrop, who, as far as our research could take us, prevented the first abduction of a child by a stranger in the State of Maine.

I’m going to say it again:

Because of the vigilance, responsiveness and bravery of Ms. Sharon Wise of Winthrop, the first abduction of a child by a stranger in the State of Maine was stopped, while it was happening. The man could have drawn a weapon on her as she pulled the child back from his grip, and even if that crossed her mind, she was undeterred and kept a 2-year-old girl from being taken from her grandmother in plain daylight. And she did it all on a bad knee.

Talk about going above and beyond.

“Generations,” wrote James Baldwin, “do not cease to be born and we are responsible to them because we are the only witnesses they have.”

May we all be so vigilant, so responsive, and so brave.

Thank you, Mr. Speaker.
Posted by Craig Hickman at 7:57 AM No comments: