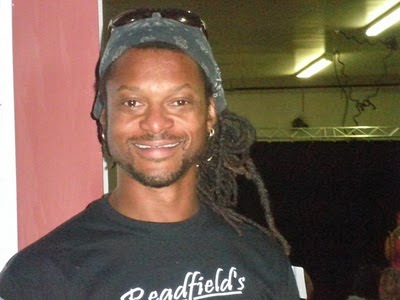 I open the Community Advertiser this past Saturday around dinner time and find this:

First place in the 2010 Readfield's Got TAlent show was won by [Winthrop] organic farmer, Craig Hickman, a poet performing his original work.

After accepting the prize of $75, Hickman took the mike and asked if the Readfield Fire Department, where the contest took place, accepted donations. When they answered that they did indeed accept donations, he gave his prize to a firefighter standing nearby.

"That was a real class act, both the poetry and the donation," said Karen Dube, organizer for Readfield Heritage Days. "Only in a small town like this could a poet beat out singers and dancers for first place in a talent contest."

I was humbled by the win, more by the mention in the local paper. Karen Dube didn't have to say what she said. She's the class act. As are all the firefighters who volunteer their precious time to keep the people in our communities safe.

Winthrop — The Rotary Club of the Winthrop Area received a visit from its district governor at a special meeting held Aug. 17 at Pepper's Restaurant in Winthrop.

Claude Martel, a member of the Rotary Club of Val Belaire in Quebec City, along with Larry Marcoux, assistant district governor and a member of the Auburn-Lewiston Rotary Club, met with the club's board of directors to discuss club plans and challenges.

Following the board meeting, Martel met with the entire club and their spouses over dinner. He had the opportunity to welcome, congratulate and encourage new members

Posted by Craig Hickman at 6:23 AM No comments:

I love stories. So when I was notified by a fellow Rotarian that Henry Carlson had made his transition, one of the first things I thought was I need to bake a sweet potato pie for his widow. One of the next things was that I would certainly be treated to some wonderful stories about this World War II veteran, mason, community leader and devoted husband at his celebration of life this morning.

And so it was. Thomas Molokie, a close friend of Lottie Carlson, gave a moving eulogy in her words. Before reading it, though, he shared a animated story about how he came to be asked to deliver the eulogy in the first place. Standing over Henry's flag-draped coffin, with humor and poignancy, Mr. Molokie related his reticence at being drawn into his friend's driveway, unannounced and unprepared, only to have her welcome him with open arms and immediately ask for his participation in the service.

After, we heard friends and family bear witness to the life of a man who made a great cup of coffee, though he didn't drink coffee, a man who took an angst-ridden teenage girl under her wings and taught her how to ski from the top of Mt. Abrams all the way down the slope, a man who taught his great nephew how to hunt and fish.

Finally, an emotional great granddaughter who only got to meet the man once, relentlessly coaxed her reluctant father to rise up and tell the story of a practical joke Henry had played on him featuring a plastic bird.

Surely, a child shall lead them.

I didn't know Henry, never even met him as far as I can remember, but the vivid stories loved ones shared made it seem as though I was listening to words about my own father. Born a mere five weeks before Henry on February 14, 1920, my father, a Tuskegee airman, also served his country in World World II. He taught me how to garden and fish, how to enjoy and cherish nature, and how to be kind to people. He passed away on March 14, 2007. As I listened this morning, I heard Daddy's words as clearly as if he were sitting there next to me and I got all choked up.

Henry's service ended with one of the most beautiful and patriotic hymns I've ever sung. The United Methodist Hymnal's version of America the Beautiful's third and last verse ends thus:

America! America!
God mend thine every flaw,
Confirm thy soul in self-control,
Thy liberty in law!

As I exited the church, thinking of the man whose life we had just celebrated, as well as my father -- two men who served their country in uniform, who loved their country as much as they loved their families -- I found these lyrics carried an extra weight, a deeper resonance as I reflect on some of the greatest challenges we face as a nation and as a state.
Posted by Craig Hickman at 9:34 AM No comments: